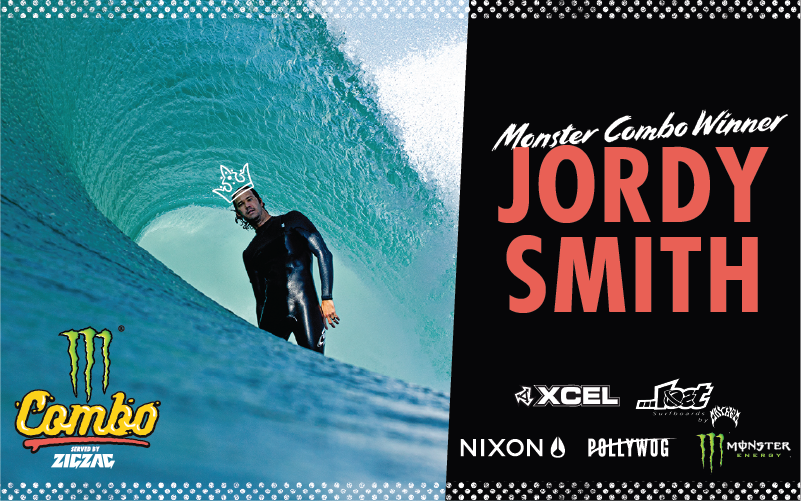 This was our most successful Monster Combo yet. Surfers from the age of 14 to 45 entered their best clips over the 4 months, for a chance of winning big. We had entries from Saffas all over the globe, in all types of conditions. And we saw it all: barrels, hacks, airs, carves, floaters. A variety of combinations from many locations.

The judges had their work cut out for them from the get-go. Each round was tightly contested and came down to the wire. Round 1 saw Davey van Zyl edge the win thanks to his aggressive and flawless approach to both the tube and the rail. Despite a strong field of entries, Round 2 was a no-brainer with Jordy Smith’s dreamy J Bay wave, ticking every box in the Monster Combo criteria and he did it at the highest level. Round 3 was tighter with Davey van Zyl, Benji Brand and Shane Sykes pushing the limits, but Jordy showed why he’s been at the pointy end of the WCT for the last decade and took the win with another J Bay dream ride.

So it was between Davey van Zyl and Jordy Smith for the Overall Monster Combo 2021 win. Two of South Africa’s most loved surfers going head to head with their best combos of the year…

After a 24 hour snap poll on Zag’s Insta stories, put the underdog, Davey van Zyl in the lead, with the public vote.

Matt Bromley was next to cast his ballot and had this to say: “For me the winner is Jordy’s Round 2 wave. Davey van Zyl showed serious flow and power with his barrel straight into that lay back gouge. However, Jordy’s fin drift off the top, recovery straight into a ridiculous pit and then no hesitation straight into the gnarliest lay back rail turn is just mind blowing. Jordy’s wave was surfed with high risk, crazy power and had that x-factor. And that’s what takes the win!”

With three votes in the bag all eyes turned to Monster’s Ryan Payne and Zigzag’s Andy Davis for the final decision.

“That was crazy! The best Monster Combo to date. Over 100 entries and all at such a high level. It’s amazing to see where the level of surfing is in SA and the talent that’s coming through. Davey and Jordy are two of the country’s finest surfers and made for a heavyweight final. Davey’s Round 1 wave was mad! He’s so precise both in the tube and on rail. He rarely makes mistakes and this is an example of that. Jordy’s entries were insane. He’s too good out at J Bay and the clips show that. The ease at which he draws his lines and reads the wave is something not often seen. In the end the winner for me was Jordy’s Round 2 wave. A variety of critical turns before a screamer of a tube. This entry was a cut above and a clear winner in my eyes.”

After much deliberation Payno had this to say, “The decimation of the J Bay wall by Jordy can’t go unwatched and needs to be seen over and over again. For that reason he gets my vote!”

Watch this space for the next Monster Combo PRIZE TRIP!!!